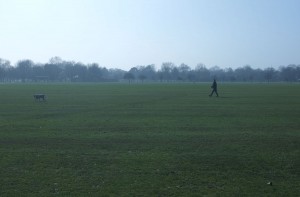 Getting There
Take the Overground towards Stratford, and get off at Hackney Wick

Greenery/Vegetation
Grass quality was average. I wasn’t very impressed with the vegetation; it’s a big open field with some trees, but all the trees were almost the same kind. Personally I am a big fan of weird, different trees, and it was quite boring and disappointing. A tiny bit of effort makes a huge difference to the eyes. Would it not be better if they were in different shapes and colours? Plants and trees are what make a park a park.

Atmosphere
This park didn’t have a personality. It’s hard to explain, but imagine you go to a park to clear your head or to distract yourself with nature, or green, but there was nothing You could distract yourself with, so you end up having the same thoughts in your head. Victoria park had a weird energy, not necessarily bad, but just not very positive either. It might be because it was too loud; the park is fairly close to the main road and it was always noisy. We didn’t feel relaxed or want to sit and chill, and the other annoying thing was that there was lots of construction work going on. As if it’s not enough that every morning, at my flat, we have to wake up with a drilling noise, therefore I was extra annoyed by the whole thing.

Tips, Tricks & Traps
It is a great park for a decent run or walk without making little circles and walking round and round. It would also be ideal if you want to cycle or perhaps learn how to cycle if you are one of those people who didn’t have a chance, or bicycle, in their youth. There were a couple of ponds, very dirty, and some kids’ play grounds that can be handy for the local mothers. Also bear in mind that the park is very big, there is the other part of it on the other side of the road that divides the park. 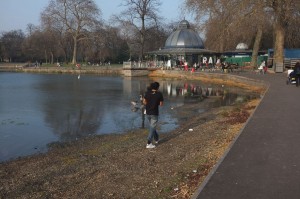 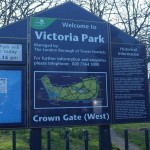 Greenery/Vegetation
Bog-standard trees & grass. Not much else. A couple of ponds with nice reeds. A small garden arrangement here and there. The grand scheme here is minimal at best, boring at worst. A few small palm trees add some spice to an otherwise mono-culture of trees. The grass looks a healthy green but on closer inspection is patchy with a lot of brown gaps. Today was dry so it was ok but I can imagine its more unpleasant in the damp. 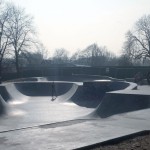 Victoria Park “wheelpark”, one of the best around

Due to bad timing most of the additional benefits of the park were under pre-Olympic construction-so by the time you read this all will be done. There was a new kids area being built that looked intricate, a Chinese pagoda next to the lake getting the finishing touches and one of the best BMX/skateboard ramps I’ve seen in a park. A small café and single goal post complete the basic amount of extras.

Atmosphere
The park is divided by a small road into the East park and West park. As we walked through the East half I was hugely unimpressed. Open fields and trees were all I could see (a pity because this is the side nearest to the Olympic side). Its dullness reminded me of Clapham common. The West half is quite different. A canal on one side and lakes on the other and better vegetation. The west side just felt cosier and had a better vibe.

Overall It isn’t a park I would go out of my way for. It’s great for the locals but there’s plenty of open spaces like this everywhere else.